So it’s been just under a week since Laneway, and I figured it was probably time I shared my experience after reading quite a few others. Spoiler alert: I had an amazing day.

Overall, Laneway 2015 was organised amazingly well. It was sold out and yet the crowds didn’t bother me at all. I waited no longer than 5 minutes for the bathroom and enjoyed about 11 different acts. I’ll run you through my day: 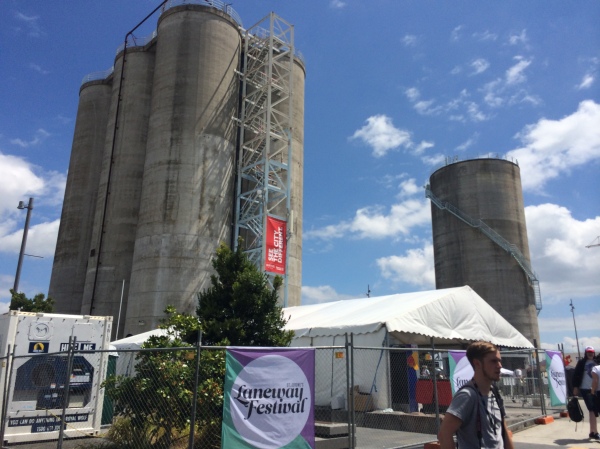 We made our way to Laneway pretty early, getting there for Princess Chelsea at 12.00pm and let us walk around and explore a bit before the crowds arrived. We then found a spot on the grass, in the shade of the silos, to see Princess Chelsea put on a beautifully sweet and charming show. I think one reviewer put it perfectly when they compared her to Lena Dunham hosting a kitten kissing competition. It was pretty adorable, and she played my favourite song of hers, Cigarette Duet. It was a pretty perfect start to a gorgeous day. 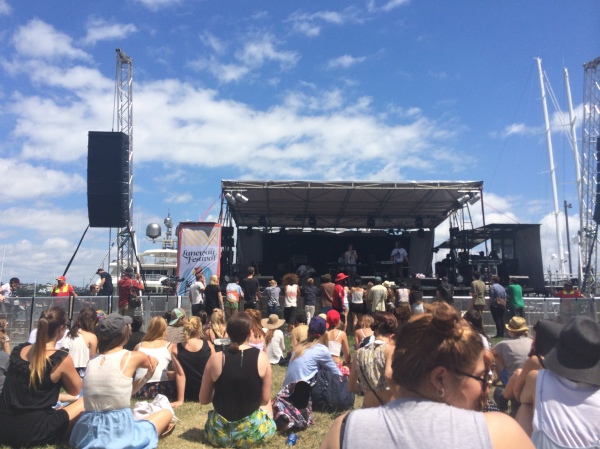 Princess Chelsea in the midday sunshine

We then ambled over to see the last 20 minutes of Tiny Ruins, a New Zealand artist who was captivating in her soft voice and quiet hold over the crowd. We also enjoyed a delicious vietnamese cold coffee to battle the sunshine. Conan Mockasin took the stage next, and put on a show that was weird but nonetheless entertaining in its 70s psychedelic rock vibes that had everyone dancing. 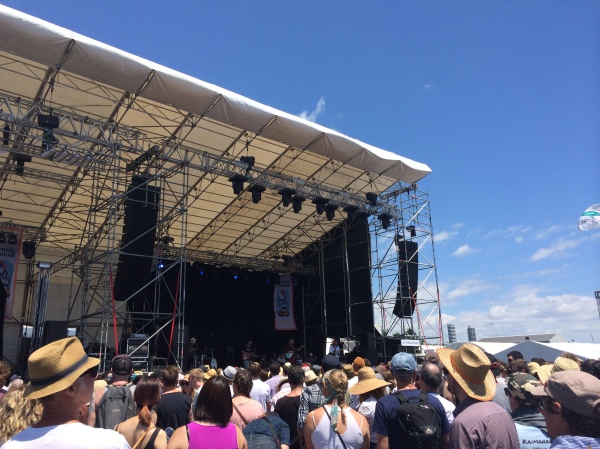 Connan doing his thing. Whatever that is. 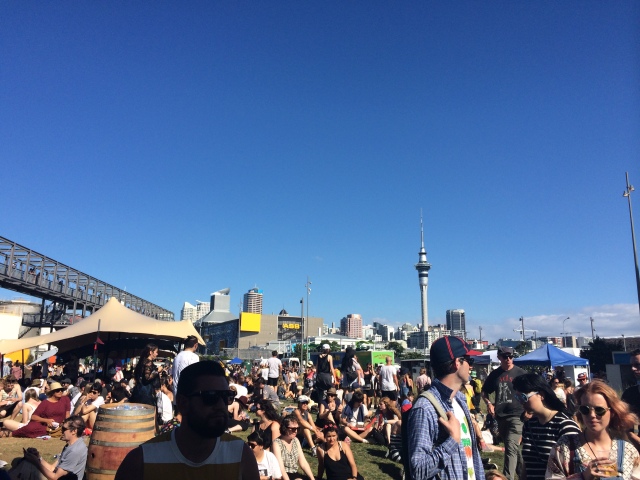 Angel Olsen was someone I was looking forward to seeing all week, and she didn’t disappoint, playing a bunch of my favourite songs in a very effortless way. I was pretty much captivated for the entire 40 minute set and didn’t want it to end. New girl crush by the way. The moment her set ended, Courtney Barnett started on the stage next door so we grabbed a quick cold drink and then watched her take over the stage, obviously having just as much fun as all of us who were watching her. 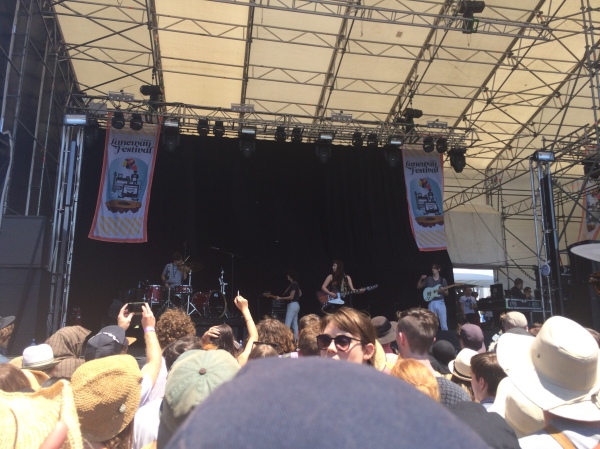 Angel Olsen a little bit crooked. I blame all of my dancing.

Royal Blood’s rock performance was one of my favourite moments of the day, with a huge number of people all yelling out the lyrics and dancing along to their high energy tracks. I am not a dancer but I don’t think anyone stood still throughout their songs. There was a lot of head banging and I didn’t even care. 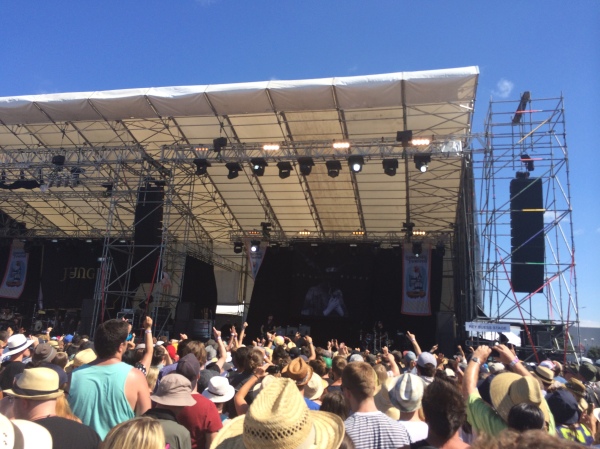 After a couple of hours of dancing around in the heat our energy reserves were pretty depleted so we grabbed a delicious meal at Bird on a Wire who were selling giant bowls of their delicious salads, topped with fresh chicken or crispy tofu. It was exactly what we needed to prepare ourselves for the next few hours. 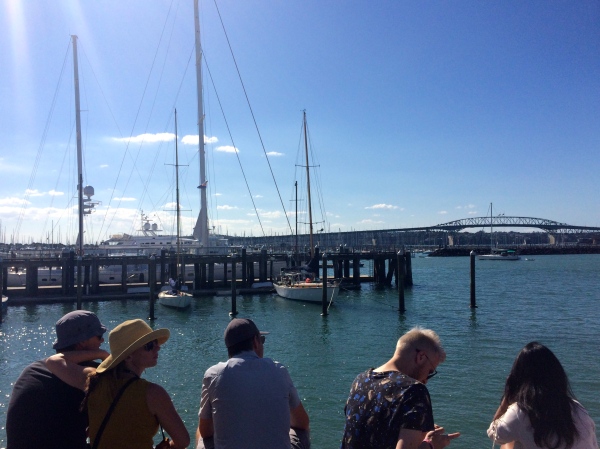 Jon Hopkins played a beautiful techno/synth set in the sunshine in front of the silos, with people dancing along to his seamlessly hypnotic electronica tracks. We then made our way to see some of Angus and Julia stone, where for the first time all day I found the crowds a little overwhelming. 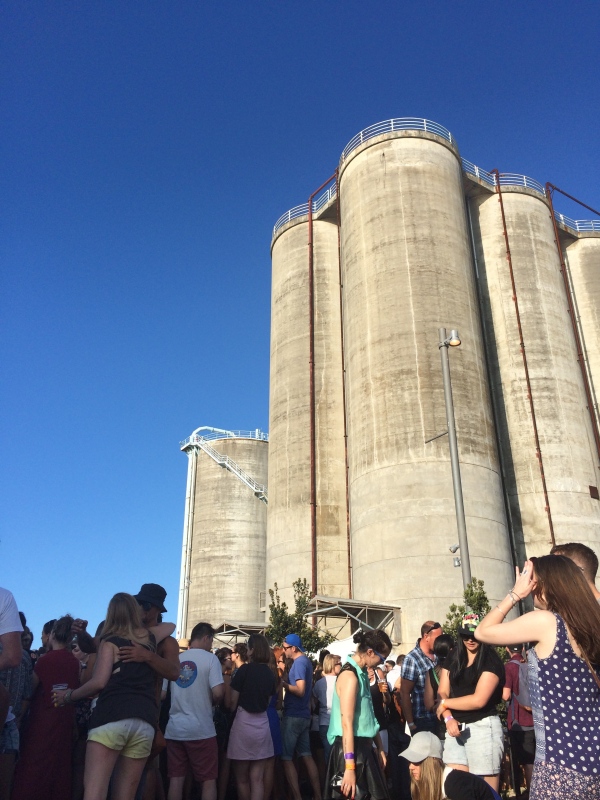 Crowding in beside the Silos to catch a glimpse of Banks

The crowds packed in for Banks, who despite some technical issues, had everyone enthralled with her quiet, shy demeanour but her beautiful voice and big beats. It took a bit of work making our way up close so with Little Dragon up next we decided to hold our ground amongst the pulsing crowd who were crammed into the small space. Probably the most memorable moment of the whole 11 hour day was watching the sun set over Auckland harbour during the Little Dragon set. It was spell binding. Dancing along with hundreds of other fans to some of their best songs made me forget about the heat and my sore legs and the crowds and just enjoy the moment.

After an hour of full on dancing, I needed a bit of a rest before St Vincent took the stage dressed up like some kind of gorgeous alien model. I wasn’t even sure if I was going to watch much of her but once she had started I was hooked on her quirky synth sounds and awkward dance moves. St Vincent was one of the best performers of the day, with her crowd in the palm of her hand hanging on to each and every sound that came out of her mouth. 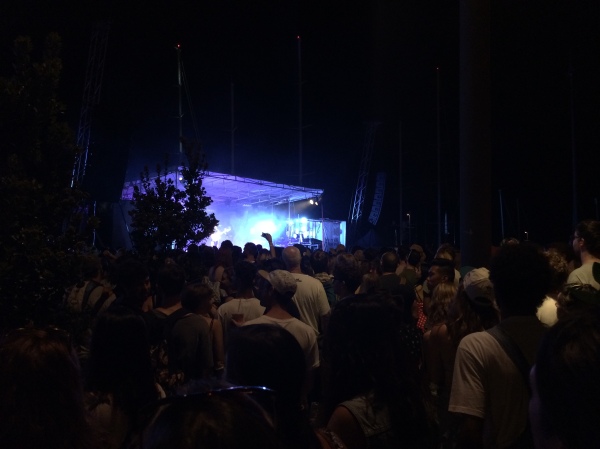 Before heading home, slightly sunburnt and totally exhausted, I wanted to see some of Flying Lotus who was finishing off the evening with his amazing 3D show. I only knew two of his songs so once I had heard them both, my weary legs demanded I take them home. As a small sidenote, Silo Park looked just as beautiful in the dark, lit up spectacularly, as it did in the gorgeous summer sunlight. What a beautifully charming venue to spend the day in. 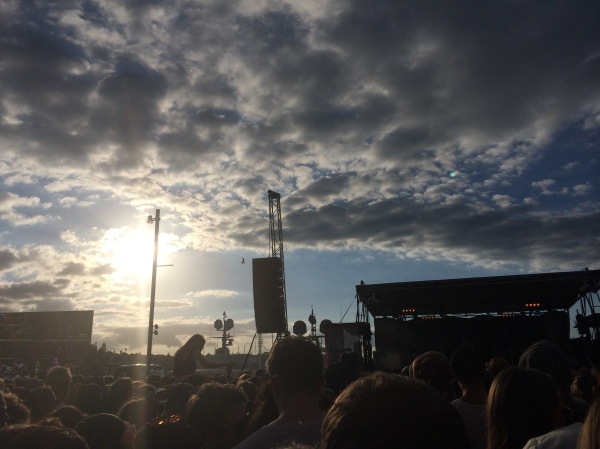 I know some people complained about Laneway; the crowds, the long lines for the drinks/bathrooms etc. etc. I had a totally different experience and so I think this is up to the individual. We decided not to bother with alcohol because I paid a fair bit for my ticket and wanted to get my music’s worth out of it. After drinking at Big Day Out last year, I found that I had more fun this year, danced just as much and didn’t need anything extra as I was pretty giddy just on the experience of the whole day. The heat was at times pretty unbearable but there was free water all over the place and spots of shade to cool down. The clashes were minimal (for me) and the only act I missed was Belle and Sebastian. We went in wanting to make the most of our day, and got way more than we bargained for. 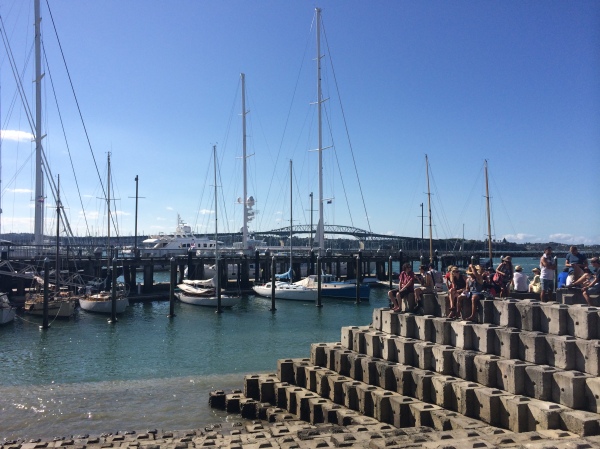 If you made it to the end of all that congrats, your reward is my 5 lessons learnt at Laneway 2015:

What was your experience at Laneway 2015?

Error: Twitter did not respond. Please wait a few minutes and refresh this page.

There was an error retrieving images from Instagram. An attempt will be remade in a few minutes.