Ready for the next instalment in my 50 Book reading challenge for 2013? Today I have 7 more books to share with you. There are have been some great books and some average books but overall I’m so happy to be immersed in reading again. I should forewarn you that almost all of these got 4 stars!! I apologise for the lack in variety but I guess most of what I read was really good haha. 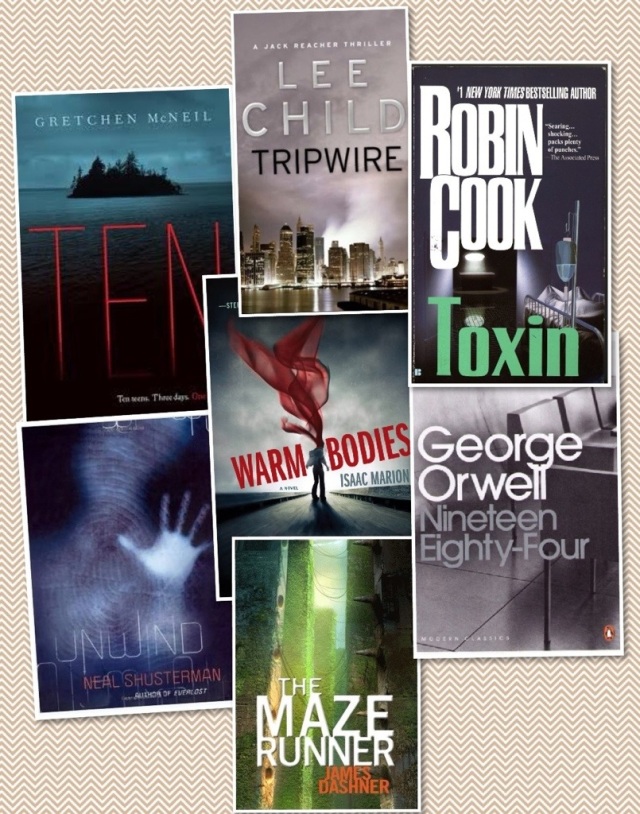 10. The Maze Runner by James Dashner
This was a really interesting read as I guess it falls into the YA dystopian genre but was different from stories like divergent and delirium in that was more of a thriller and ALOT less romance. It’s also told from a male main character as opposed to the typical female lead characters I was used to. At first this slightly more “male” take on the genre wasn’t my cup of tea by the more I read the more I enjoyed it and now I think the book did an awesome job or creatinga world that drew the reader in. Give it a read if you like Dystopian books.
4 Stars

11. Toxin by Robin Cook
I love Robin Cook and his medical thrillers but they might not be everyone’s typical read. He’s one of those few authors for me who I know I can pick up one of his books and ill thoroughly enjoy it. This one was no exception, a great, enthralling read about a fathers daughter who gets sick with food poisoning. Layers of disgusting meat processing investigations and thrilling murders take place in a quick but exciting read that pretty much put me off eating me meat forever (but not really cause I love meat).
4 Stars

12. Warm Bodies by Isaac Marion
As soon as I read that this was a book about the zombie apocalypse but from a zombie’s perspective (the adorable “R”) I had to read it and I wasn’t disappointed. A unique story with great characters and an enjoyable style of writing. Quick and fun so I definitely recommend it.
4 Stars

13. Tripwire by Lee Child
Like Robin Cook, Lee Child is an author I know I love and can trust that each book will be enjoyable. This one (the third in the Jack Reacher world I believe) was a great, fun action read with a very enjoyable romantic side story. I love the fast paced writing of Lee Child at make reading his books a breeze.
4 Stars

14. Ten by Gretchen McNeil
This horror story takes place on a an isolated island mansion, in the midst of a terrible storm with 10 teenagers ready to party when things start to go wrong. If this doesn’t sound like a cheesy 90s slasher film crossed with an Agatha Christie murder mystery then let me just confirm that that is EXACTLY what this felt like to me. Regardless of the totally predictable plot & characters I have to admit I enjoyed the read (the same way I enjoy a terrible slasher film). It was a fun quick read so I don’t care that the writing was very average and the characters were terribly annoying.
2 Stars

15. Unwind by Neil Shusterman
My other dystopian YA read (can you tell I enjoy these?) was set in a future where between the ages of 13-18 (if I recall correctly) can be chosen to be unwound and have their body distributed to those who need it. I enjoyed the story of the three main characters but I felt like the setting and the background story weren’t really explained enough. It made the whole thing feel a little less plausible however despite that I still really enjoyed the story and its originality.
4 Stars

16.1984 by George Orwell
My last read was this classic novel describing Orwell’s imagined future in a society run on fear, war and complete power. I wasn’t expecting to enjoy this as a story as I knew it was more of a long essay on one man’s predictions. Having said this I actually found the main character and his struggle in this society watched over by “Big Brother” incredibly interesting and thought provoking. It did take a while to get through but I left the book with questions all through my mind which I love. A hopeless, depressing story that described expertly a terrifying future society.
5 Stars

That’s it for now! Check out my last post on books 1-9 and don’t forget to join me on Goodreads 🙂
Xx